Today, the applications for cell-based assays are as diverse as the number of questions in research and medicine. Main application fields for INCYTON® technology are toxicological assessments, drug screening, mitochondrial profiling as well as cellular research in general. Our assays help to understand complex cellular relationships through the simultaneous observation of several key cell parameters. In combination with real-time monitoring, kinetics of substance responses can be identified.

MCF-7 under the influence of different CAA concentrations 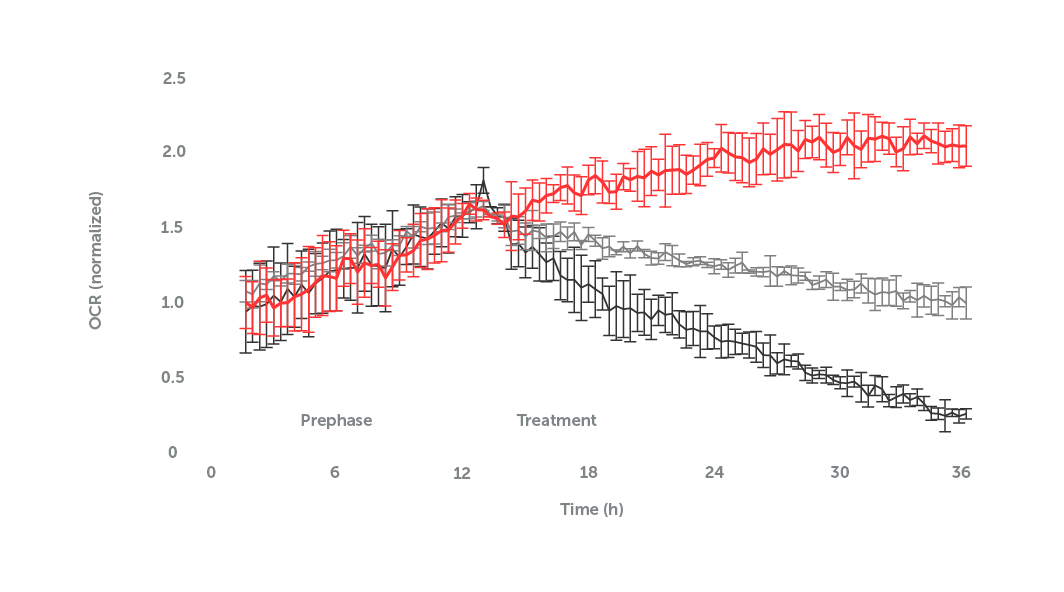 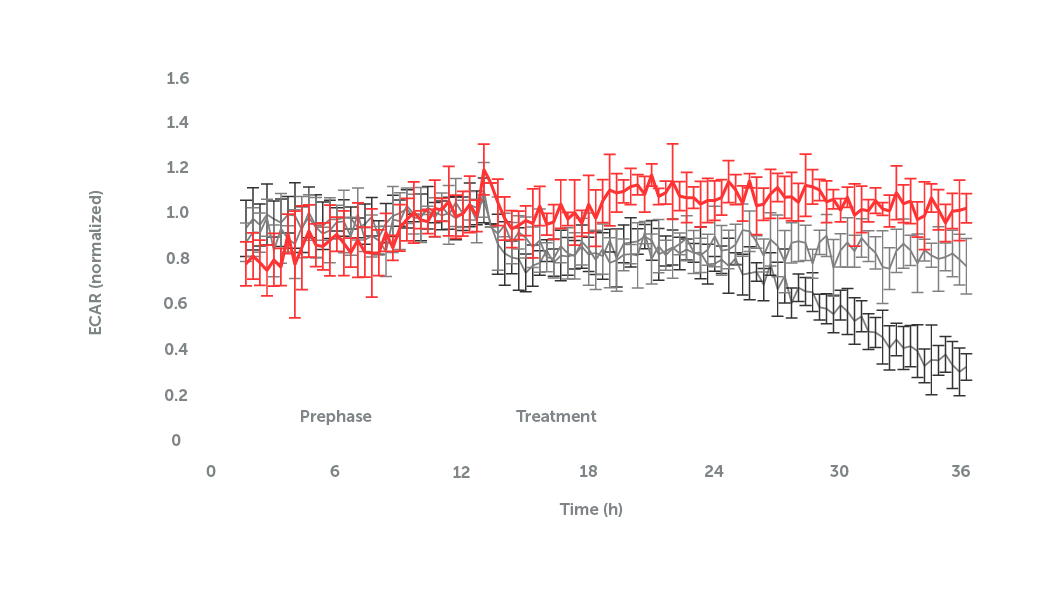 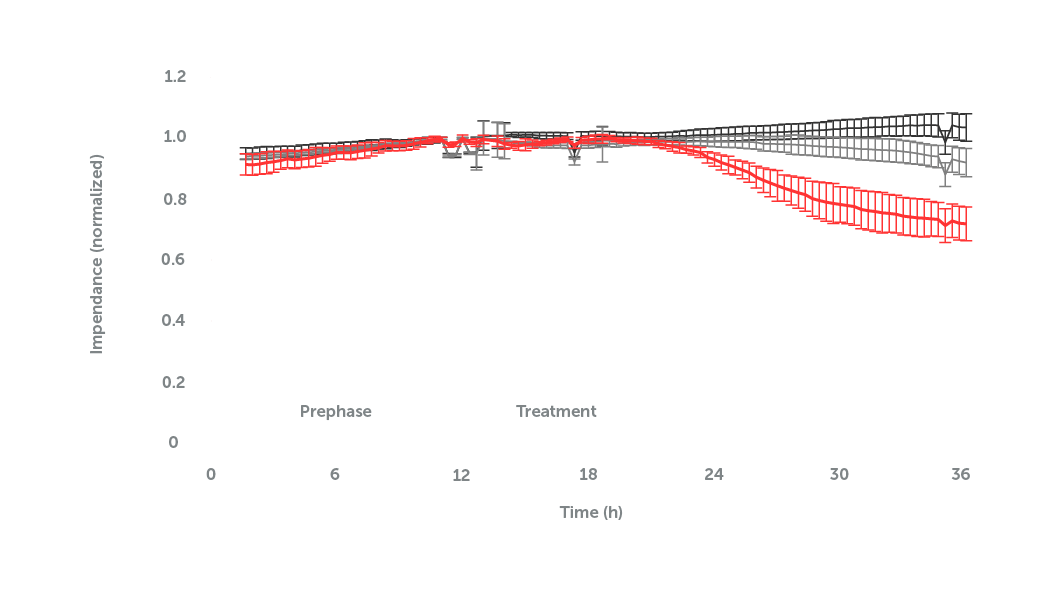 An experiment in the field of cancer research with a simple design illustrates the interplay of the different sensor systems in CYRIS® platforms.

Cells of the breast cancer cell line MCF-7 were seeded out on a sensor plate and cultured until they were attached to the surface. Subsequently, the cells were treated, and the sensor plate data were read out continuously in a CYRIS® analysis platform. As a result, all cells were cultured for 12 hours without the use of a substance, and then groups of cells were treated with either 0 μM (untreated control group), 10 µM, or 25 µM of the cytostatic substance chloroacetaldehyde (CAA) continuously for another 24 hours.The label-free sensors recorded were the OCR, the ECAR, and the impedance of the cells, as well as the morphology based on regular microscope images.

All parameters of the label-free sensors show a concentration-dependent damage of the cells after the time point of drug addiction (12 h). The different cellular systems, represented by the measured parameter of OCR (respiratory chain), ECAR (glycolysis), and impedance (cell number, adhesion), show different kinetics in the course of the cellular reaction.

The respiratory chain is negatively affected directly and continuously by the drug, while the glycolysis, in the first hours, is “only” inhibited via the blocking properties of the drug on the glucose transport. About eight hours after drug addition, the negative effect in the treatment group with the highest drug concentration is so intense that the cells die as they lose their attachment to the sensor (drop in impedance) and the glycolysis collapses. 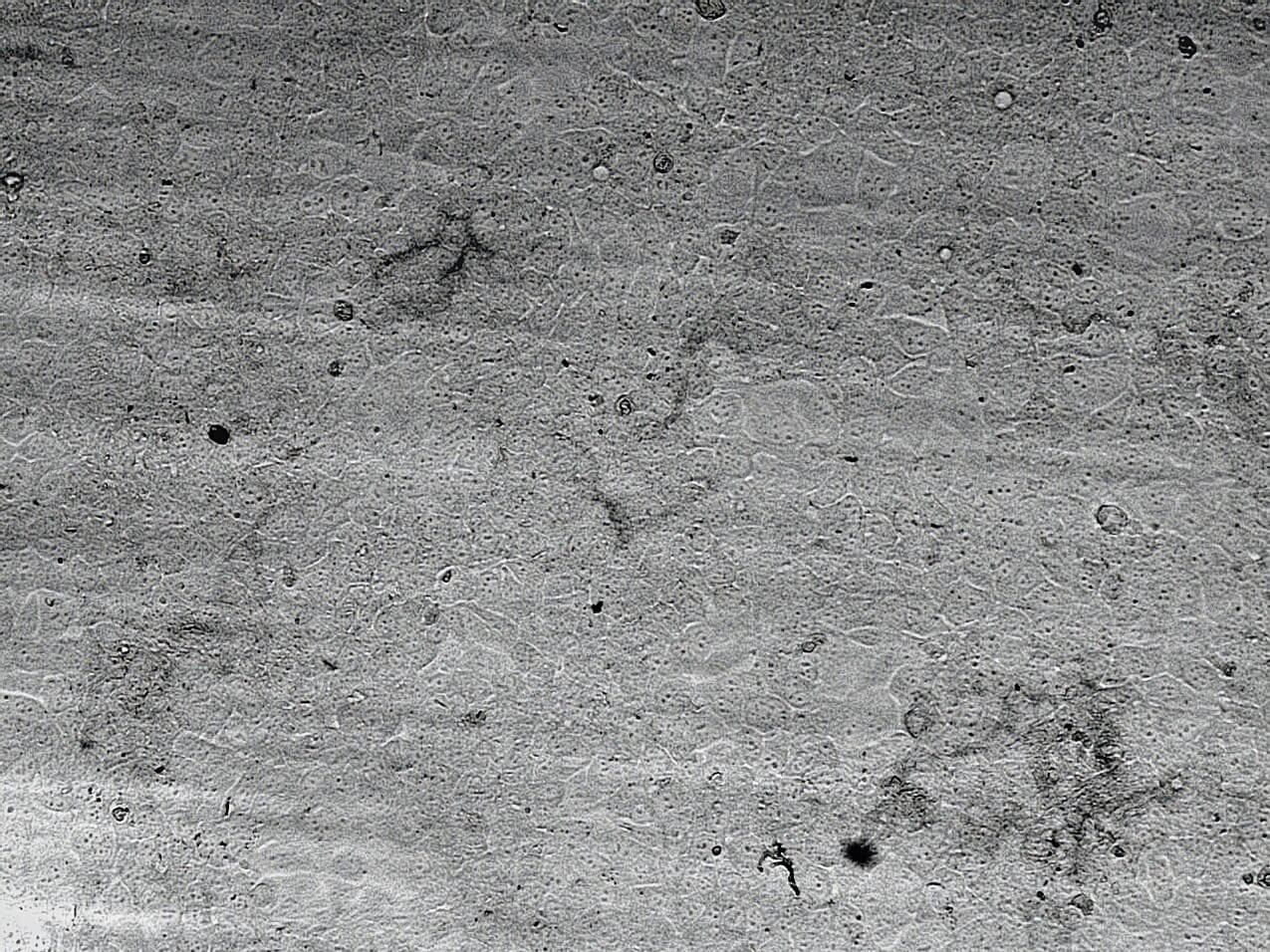 The microscopic images, made in periodic intervals (20 min), underline the data of the real-time sensors. Twenty-four hours after the addition of the drug, untreated control cells show an interwoven MCF-7 cell layer. Cultures treated with 10 µM CAA show a stable monolayer, with, at most, slight gaps between the cells. At 25 µM CAA, cells have round cell bodies and show intracellular accumulations, which is a typical sign of cell death.

This assay demonstrates the power of the combined real-time sensor and microscope system in CYRIS® platforms.

L929 cells were seeded out into a sensor plate and incubated under standard cell culture conditions until the adhesion on the substrate was achieved. Subsequently, the sensor plate was put in the CYRIS® real-time analysis platform, and a preprogrammed assay procedure was started. The test settings included a preincubation without any active substance for 12 hours and a treatment of the cells with different concentrations of sodium lauryl sulfate (SLS, 0 µg/ml, 77.8 µg/ml, 778 µg/ml) in the next 12 hours. During the whole assay, the OCR and the ECAR, as well as the morphology based on regular microscope images, were recorded.

L929 under the influence of different SLS concentrations 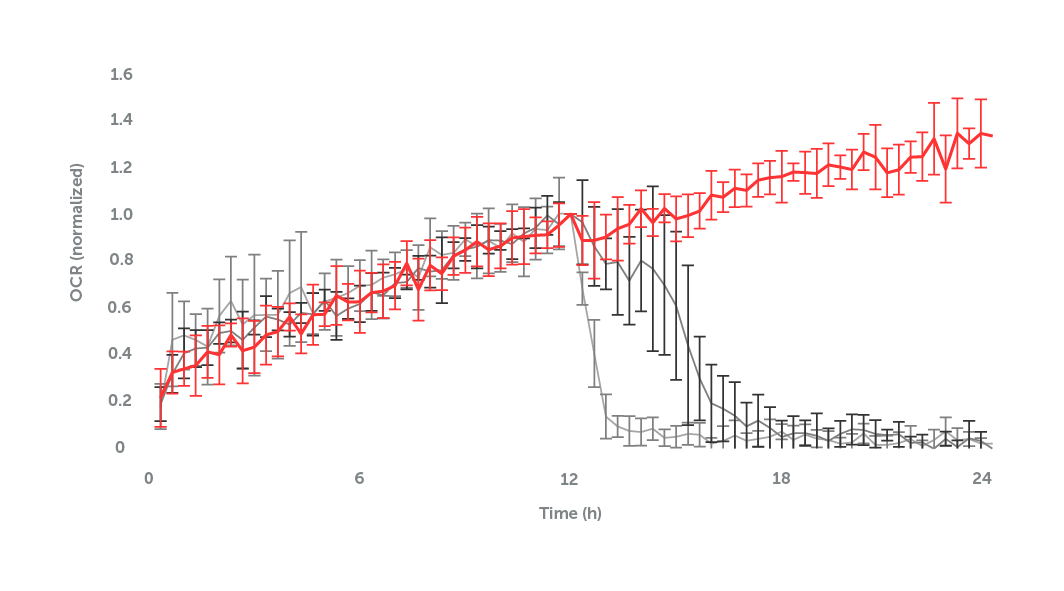 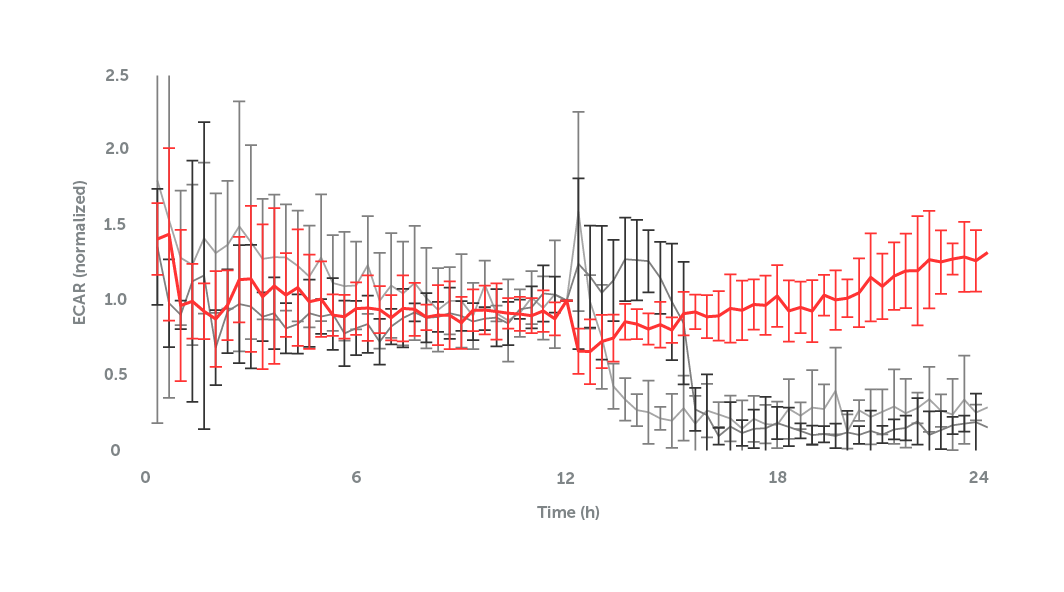 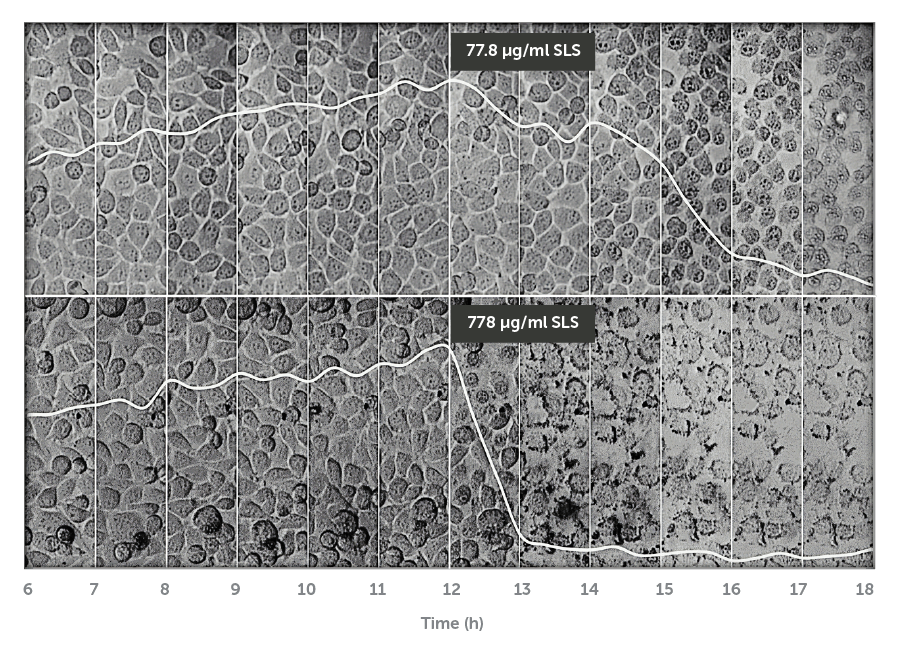 The results of the metabolic monitoring clearly show the concentration-dependent change of OCR and ECAR in a quantitative and temporal profile. The OCR of the control group is growing steadily. A high amount of SLS (778 μg/ml) leads to a fast shutdown of OCR and ECAR within a few hours. This can be attributed to the global membrane damaging effect of SLS. The results of a medium concentration of SLS (77.8 μg/ml) demonstrate how multiple sensorics can help to identify the temporal mechanisms of action of a substance.

In the first three hours after SLS addition, the OCR is reduced by about 20% before it decreases rapidly to near zero. In the same time period in which the OCR is decreasing, the ECAR is increasing for about 25% before it is also falling rapidly. Responsible for these opposite effects is a rapid damage to the sensitive mitochondrial membranes in which the respiratory chain takes place and the attempt of the cell to compensate for this metabolic loss via an increased glycolysis (increasing acidification). After about three hours of treatment, the damage to all cell membranes has progressed so far that the cell dies and the metabolic values drop continuously.

Because of the known exact time point of every measuring and imaging event, correlating these data for comparison is possible. When correlating cell images in an hourly interval with the cellular oxygen uptake under SLS influence, clear morphologic changes are apparent. The increase of the OCR before SLS addition is associated with a higher cell density.

After the addition of 77.8 μg/ml SDS, cell spacing and roundness is increasing slowly over the next six hours. Three to four hours after SDS addition, intracellular condensations occur clearly. 778 μg/ml SDS lead to a rapid destruction of the cell integrity within an hour.

Here we show the procedure on the CYRIS® platform exemplary with the mouse fibroblast cell line L929 and a fast preparation protocol (seeding and measuring the cells in one day).

Raw measured OCR data can be exported directly to downstream software. This makes it possible to evaluate the data according to your own preferences. In this example, we first normalized the individual rates of each well by setting the mean of the second and third baseline rates (40 min and 60 min) as “100%”.

Subsequently, we combined all rates, which were treated the same way, into a separate group (control, 0.50 μM FCCP, 0.25 μM FCCP, and 0.13 μM FCCP). The mean rates and standard deviations of these groups are plotted against time.

Maximum respiration is within the range of variation under the influence of 0.25 μM FCCP and 0.13 μM FCCP.

This shows that the optimal FCCP concentration is in the range of these values. The value is 131% of the basal respiration. Therefore, the cells have a reserve capacity of 31% in this case. The non-mitochondrial oxygen consumption of the cells is 22%.

Continuous cell imaging reveals vital, sub-confluent cells that show virtually no significant changes over the measurement period. However, this was not to be expected, because during the measurement, only a brief and very local influence on the respiratory chain was taken.

The experiment results show an undisturbed, correct course. All measured OCRs were evaluable and consistent. The controls show a normal course.

The different treatment groups differ in their kinetic only at the periods where different FCCP concentrations act on them. In addition, they show only small standard deviations.

The usable oxygen for ATP production is 44% of the basal respiration. 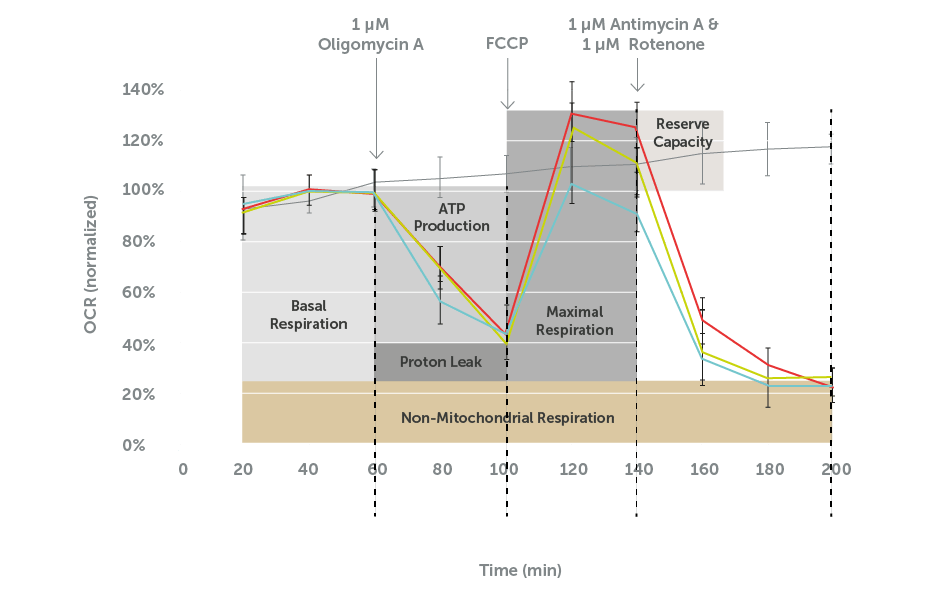